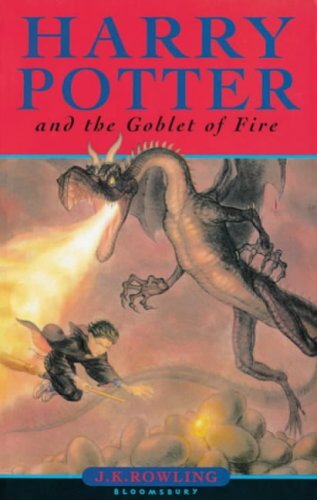 I eventually had read through Harry Potter and the Goblet of Fire (ISBN: 0747550999) a few days ago, (Hu… it took me about half of the winter vacation…), and on the same day, I also saw the movie. I remembered the story so clearly when I was seeing the movie. Although it may be a bit boring if I saw the movie just after reading through the novel, I can obviously find the deficiency in the movie.

I think the whole story is too long for a two-to-three-hour movie to present. A lot of details are cut in the movie, but it’s not the movie’s fault. And I think if I hadn’t read the novel first, I may not understand why and how the story’s going on. For this reason, I don’t think the movie is so successful as the box office receipts revealed.

The most worthy thing in the movie to see is the fighting scenes. The movie does better than the novel, although the movie seems to change some details of the story. For example, I like the fighting in the first task. In the novel, I felt lesser nervous with Harry, but in the movie, I can see how dangerous Harry was and how terrifying the dragon was. I think the director put a lot of time and effort here. However, the second and third tasks are less splendid. In the lake, I think the speed can be slower. The movie doesn’t show enough in Harry’s pity on Flour’s sister, and (although I don’t measure the time), compare to the first task, the time may be shorter. Before the third task, Dumbledore told the champions that there’ll be more monsters in the maze, but I didn’t see any, no Skrewts, which Hagrid taught them in the class. But the fighting with Vordemort is as well as the novel.

The movie cut a lot of unrelated roles, such as the Daily Prophet reporter, Rita Skeeter. In the novel, she’s very interested in Harry and did many things seemed bad to him, but finally she’s not the key for the ending. I think the appearance of her may be the reflection of Hermione’s wisdom. But I guess she may play a key role in the future stories. :p

Another bad thing is that Dumbledore seemed stupid in the movie. He seemed unable to catch up the changing of the situation. The image of him was much different from before. But in the novel, I don’t think he is as foolish as in the movie. He’s also calm and wise.

I also bought Harry Potter and the Order of the Phoenix (ISBN: 0747561079 ), but the rest days of the vacation seems not enough for me to read it. And I have no idea that the movie of it will start or not. (The actor of Dumbledore was dead?) Nevertheless, I feel so happy that I can read through the novel within such short period, which proves that I have the ability, and I’ll keep on proving myself in the future.